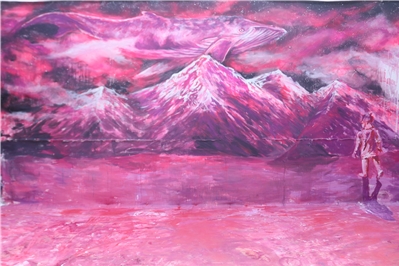 As part of:
General

Launch of a Music/Art video collaboration with Mt Eden Official music. Colours for Causes Part 1, of a 4 part series highlighting different charities. Laken Whitecliffe collaborates with Mt Eden Aka (Jesse Cooper) who had a pre existing connection with the Breast Cancer Foundation NZ, due to his wife Talia Coopers battle with Breast Cancer. Laken painted with the colour Pink to tie in the connection with Breast Cancer Foundation New Zealand (BCFNZ) while Mt Eden played his song "With You". This painting was made as an expression of the connection between music and visual experience music invoked within concepts of Synesthesia. Put simply, seeing the colour in the music played by Mt Eden, as he played a 45min set for Laken to paint his response to his music.

The concept was to capture the magic of that connection between Painting(Laken Whitecliffe) and Music(Mt Eden). Laken and Jesse grew up on the same street, as neighbours, their father's became friends and they both attended the same primary school in Maungawhau (Mt Eden). Laken's father Greg Whitecliffe passed away from pancreatic and Liver cancer shortly after he left Maungawhau Primary School. Years later both Laken Whitecliffe and Mt Eden re connected in Brooklyn, NYC where they both were living. Both were pursuing their respective creative fields.

Laken Whitecliffe was studying at Montclair state University on a Scholarship exchange, while working for his University Painting mentor Julie Heffernan, and as a studio assistant to kiwi/NYC based artist Max Gimblett. During his studies he continued his exploration of Street Art and made a mural depicting Mt Eden Official Music in Brooklyn. Laken spoke at the United Nation's representing New Zealand in an Anzac Day Youth Leadership conference about his Gallipoli Mural painted at the Browns Bay RSA, Auckland, he expressed how public art can heal old and new wounds, bringing together a sense of community in the very streets we walk on, in our daily lives.

When Laken Whitecliffe saw the emotional hardships Talia had experienced in her Battle with Breast Cancer, he reached out to Mt Eden with an idea of how they could use their creative relationship to assist the Breast Cancer Foundation NZ help people like Talia in their time of need.

The imagery that came out in their 45min set was an Amalgamation of the emotions tied to those effected by Breast Cancer. The surrealist dreamscape has the figure of Talia and Jesse's Son, walking into the landscape, as a representation of the aspirations brought about by the work of Breast Cancer foundation, that kids effected by illness won't walk alone. The imagery of the Whale floating through the sky, represents those who will float in from nowhere, to lend a helping hand. The Whale is a Tapu (sacred) Animal in Maori(Laken Whitecliffe is of Maori and European descent) and Niuean (Mt Eden is of Niuean Decent) culture. One that you can only look at and marvel at its majestic brilliance, a living embodiment of the living heart of the ocean under Atua (sacred protection). The Mountains symbolise the mountains we all must climb to overcome the trauma of illness, as well having the link of Mountains in reference to Mt Eden's name sake.

If you have seen the video or heard about this project and would like to make a donation for the Breast Cancer Foundation NZ, be it $2 or more, that would help immensely towards a continuation of Charity Art/Music collaborations.

Due to restrictions of the current pandemic the Auction event for the sale of the actual painting will not be held until 2022. A date has yet to be confirmed. The highest donations will act as an initial bid leading up to the Live Auction Event. All money raised will go directly to the Breast Cancer Foundation.

The painting is on canvas, so it can be stretched, or hung inside or outside a building, corporate office, or private residence. This video and the Art made within it has been self funded by Laken Whitecliffe Art Ltd. The large expense and effort incurred in launching this video has been a passion project for Laken Whitecliffe.

Thank you for reading and watching the video. We look forward to seeing you at the Live Auction 2022